Lodge of Amity and Rossendale Forest No.283....

This year has not starting on a good note as the Coronavirus Covid-19 is still with us. All Masonic activity has been suspended by UGLE, which means that we can no longer meet in our Masonic Halls or anywhere else for that matter, we can only meet virtually through video technology.

The Lodge was unable to meet due to Covid-19. However, a VLM was held by video technology. The Lodge Committee had recommended that the WM and all the Officers should stay in post for the ensuing year as they could not perform their duties for the most part of last year, this was approved at the VLM in December 2020.

The VLM was opened by the WM, WBro Dennis Heskett PProvDepGDC welcoming everyone to what would have in normal times been our Installation meeting. There were 16 members and 6 visitors present.

The DC asked the WM if he would appoint his officers which he did. All the 2020 Officers will stay in post for a further year and new Officers were appointed as follows:

The Secretary read the communications and correspondence and visiting Brethren tendered greetings. There being no other business the Lodge was closed by the SW, Bro Ken Lee and the JW Bro Will Atkinson.

There was just time to draw the Installation Raffle before admitting the non-Masonic visitors. The winners were:

The raffle raised the fantastic sum of £300 for Charity.

An Artistic Journey through Lockdown

Six non-Masonic visitors were then admitted to the meeting to hear a superb presentation by WBro Steve Crowther entitled 'An Artistic Journey through Lockdown'. The presentation was Steve's own personal journey and was most interesting and well received with a Q and A session afterwards. The WM thanked WBro Crowther for his presentation. The Tyler then gave the Tyler's Toast to end the evening. 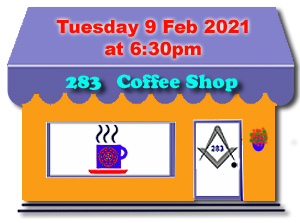 Eleven members dropped in to the 283 Coffee Shop to have a chat and a laugh. Some good discussion evolved covering a multitude of subjects, including the Pathway planning, Covid vaccinations, overseas travel and changes to the Pet Passport scheme.

The Secretary gave a reminder of the Pathway Zoom presentation on Thursday evening and also some zoom meetings for other Lodges in our District.
Another enjoyable get together over a coffee.

The VLM was opened by WBro Michael Rosney PProvSGD in the absence of the WM and the IPM. The minutes of the last VLM were approved by a show of hands. The next business on the agenda was a presentation entitled "Our Lodge Website - a Journey of Discovery" by the Webmaster, WBro Stuart Rayton PProvGSwdB. The walkthrough was well received; WBro Greg Casson PProvGSwdB proposed a vote of thanks and the Brethren responded in the usual Masonic manner.

A report was received from the Almoner WBro Derek Smith PProvDepGDC, with no reports from the CS or Treasurer. In AOB, WBro Alan Fielder ProvAGStdB gave a brief update on the progress of the "Pathway" scheme. The five visiting Brethren tendered greetings and commented on the presentation. There being no further business the VLM was closed and the Tyler proposed the Tyler's toast to end the evening.

The VLM was opened by WBro Dennis Heskett PProvDepGDC although WBro Heskett was slightly late joining the meeting the IPM WBro Ray Godwin ProvGStwd pretended to have opened the meeting by declaring 'the meeting is therefore open' just as the WM joined the meeting. The joke was taken light-heartedly by the WM who then proceeded to open the meeting proper. The minutes of the last VLM were approved by a show of hands. The next business on the agenda was a presentation by the WM entitled "The Place & Role of the Master of the Lodge" a paper by WBro Revd Neville Barker Cryer PGChap, Prestonian Lecturer (1974) and Batham Lecturer (1996-1998). The presentation was well received by the Brethren.

A report was received from the Almoner WBro Derek Smith PProvDepGDC, and a report from the CS. Fourteen Members and eight visitors attended the meeting. The visiting Brethren tendered greetings and commented on the presentation. There being no further business the VLM was closed and the Tyler proposed the Tyler's toast to end the evening. 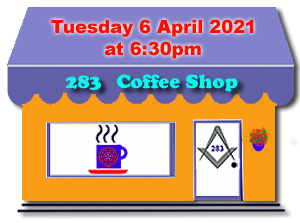 Eight of the Brethren dropped in for a social catch up on Tuesday evening. A diverse range of topics were discussed, including the feedback that had been collated from the Lodge Planning survey. The members explored ideas that could help attract more people into the craft, including potentially making Freemasonry meetings and ritual more accessible, organising Lodge room tours and generally raising the profile of Lodges within their communities. All agreed that the maintenance of traditions remains an especially important aspect of Freemasonry.

The sad story of Brother Gabriel Bullock who fell in the Great War was talked about and there was a great deal of enthusiasm shown for a potential Lodge trip to tour the battlefields of Northern France and to lay a tribute on his grave in the Somme.

Reminders of upcoming online events were shared and the Brethren looked forward to the time when they could again meet and socialise in person.

The Worshipful Master, WBro D Heskett, PProvDepGDC was unable to attend the meeting and had recorded his apologies. In his absence WBro M Rosney, PProvSGD, DC chaired the meeting. The meeting was opened at 7:10pm by WBro Rosney, who welcomed all those present, including ten visitors, to the meeting. We had 9 members and 10 visitors in attendance at this meeting.

The main business of the evening was to receive a presentation by WBro Godwin, entitled "Bro Gabriel Bullock - Wherever Right and Glory Leads". WBro Godwin thanked WBro Rosney and gave a short preamble to a film he had produced using previously researched material in addition to plenty of newly discovered information gathered during his own very recent research.

WBro Godwin explored the history of Bro Bullock and his family, the times in which they lived and the Haslingden area. He moved on to look at the progression of the first world war, the transition to conscripted service personnel and Bro Bullock as a gunner in France where he met his untimely death on the 15th of September 1918, just 57 days before armistice. The film was outstanding in content and production and all those present were thoroughly gripped by the poignant content.

WBro Rosney thanked WBro Godwin for his excellent presentation and acknowledged the effort and research that must have gone into such a fine piece of production.

The Brethren showed their appreciation with a silent round of applause as they were all muted. WBro Godwin reminded the Brethren that the Lodge members have agreed to display a photo of Bro Bullock and make mention of him at our September meetings on the anniversary of his death. WBro S Rayton, PProvGSwdB, SD has procured two replica medals and WBro Godwin a cap badge from Bro Bullock's regiment which will all be displayed in the photo frame along with Bro Bullock's image. The members have also agreed to lay a wreath in his memory at Haslingden war memorial on Armistice Day in November each year.

The Almoner, Charity Steward and Accounts and Financial reports were received.

The visitors tendered greetings and the meeting was closed in peace and harmony at 7:58pm.

This was the first face to face Lodge meeting since March 2020, although it was held under the 'Rule of SIX' plus the Tyler, all were wearing face masks and socially distanced. Several Brethren were multi-tasking with various Offices of the Lodge. The Masonic Hall had provided additional Face Masks and sanitation stations throughout the Hall.

The Brethren present were:

All in all, the meeting went very well, the WM and the brethren present successfully worked through the Summons and Balloted for our Candidate for Initiation Mr Bogdan Manoliu which proved successful and he will be Initiated in September, rules permitting.

The Brethren agreed it was good to meet face to face after such a long time away from the Masonic Hall. 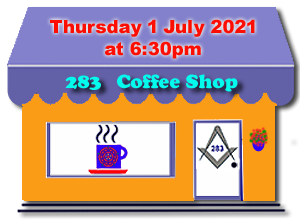 Our District Chairman Dave McGurty, our prospective candidate, a joining member and 10 members dropped into the Coffee Shop for a chat and a catch-up. A minute of reflexion was observed in respect of departed merit of Bro. Vincent Frain who died 26 June 2021. A wide range of topics were discussed including the latest fishing trip of Andy and Ray into Morecambe Bay, to view their story click here. Andy is planning a 3-4 day fishing trip to Oban in Scotland later this year, if anyone is interested in joining him, please let him know as soon as possible. The banter was again lively and jovial, a good night all round.