Rossendale Forest Lodge No.4138
A Masonic Lodge 91 years old:
A tale of two Lodges Part 2
[ View a record of Past Masters of and in the Lodge. ]

The following resolution, having duly appeared on the notice convening the meeting, it was proposed, seconded and carried, viz:

"W.Bro. R.V.S. Houghton, PM, PPGSD will propose a resolution asking the Brethren to support a petition for the formation of an additional Lodge in Haslingden, and authorising the W.M., Snr and Jnr Wardens to sign the same."

W.Bro.R.V.S.Houghton PM, PPGSD proposed the resolution, and it was seconded by Bro. Hesford, and duly carried.

The Form of Petition to Grand Lodge was signed by the WM, Snr and Jnr Wardens.

The formal Petition sent to Provincial Grand Lodge was as follows:

PETITION FOR ADDITIONAL LODGE IN HASLINGDEN.

Sent along with the Petition to the MWGM of the UGLE to W.Bro Clayton, Prov. Grand Secretary, East Lancs, 2 Cooper Street, Manchester, on the 5 May, 1920.

For some time past it has been in the minds of many resident Freemasons in Haslingden that the time had arrived to seriously consider the advisability of approaching Provincial Grand Lodge with a view of obtaining their sanction to support the request for the granting of an additional Lodge in Haslingden.

We the underwritten (after due and ripe consideration), pray to submit to Provincial Grand Lodge, through you, W.Bro. Clayton, the following particulars and details, which we hope may show you the advisability of supporting the prayer of your petitioners, which we feel would certainly be for the good of Freemasonry in general and for local Freemasonry in particular.  We therefore beg to submit the following clauses in support of our Petition.

The two Lodges now situate in Haslingden have a membership as follows:

Both Lodges have also a waiting list of candidates anxious to become members of our Illustrious Order.

The membership stated above brings us to the point (a very important point in the minds of your petitioners) that the hope of many of the respective Brethren of reaching office in their Lodge is remote, and whilst your petitioners fully realise the inadvisability of too quick promotion to office, yet we feel the reasonable means should be provided for those desirable Brethren, who by regular attendance, and devotion to the Craft, should in due time reap the fruits of their labours, which means, if not provided, may tend to deaden their ardour and create a spirit of lassitude to many who may otherwise become ardent and hardworking Brethren.

If the Petition is granted we doubt not of the permanency and stability of the proposed new Lodge.  The intention of your petitioners is to make the Lodge an Educational Institution by arranging at its after meetings for Lectures, Papers etc., on Masonic matters appertaining to the Craft, which we hope would be a means of strengthening and advancing the glorious tenets and principles of our Illustrious Order.

The name suggested for the prospective Lodge is "ROSSENDALE FOREST LODGE", from the fact that a part of the Borough of Haslingden includes a portion of the historic area known as the Forest of Rossendale, the particular area is said to have been (in the past) a training-ground for Falcons, for the Royal House. We thus suggest the name, as its ancient characteristic is in sympathy with our Ancient Craft.

The place of meeting will eventually be at the Masonic Hall, Regent Street, Haslingden, when the same is completed. In the meantime a suitable room –; off licensed premises –; (as the Lodge is intended to be conducted on purely temperance lines), is receiving the consideration of your petitioners.

We therefore, in conclusion, as you to carefully consider the case of the underwritten Petitioners, and humbly pray that the same may find favour at the hands of the RW Provincial Grand Master.

P.S. - The number of the Petitions has purposely been kept within reasonable limits, thus conforming to the suggestions given by Grand Lodge in the Form issued for the guidance of Petitioners.

The Lodge of Amity received a letter from the Provincial Grand Secretary dated 26 June, 1920, advising that the M.W. The Grand Master had been pleased to accede to the prayer of the petition for the proposed Rossendale Forest Lodge to meet at Haslingden. The number of the Lodge will be 4138.

So Rossendale Forest Lodge No.4138 was born and consecrated at the Public Hall, Haslingden on 25 October 1920, by the Very Worshipful Brother Lt. Col. Sir Alan J Sykes, Bart, MP, PGD, Deputy Provincial Grand Master. The records show that thirty-one Grand and Provincial Officers were present and one hundred and thirty-five from thirty-two lodges attended. A lot of Brethren must not have signed the attendance book because the total number present was more than three hundred! Two candidates were proposed at the Consecration Ceremony, namely Mr. Edgar Lord (Lewis) aged 25, Cabinet Maker, and Mr. Thomas Sutcliffe Lord (Lewis) aged 22, Bank Clerk; both of 46 Well Street, Haslingden.

In 1923, the Lodge proposed to amend Bye Law No.2 -- that is the Bye Law which stated: "Refreshments supplied by this Lodge shall be of a non-intoxicating nature", and of course, the proposed amendment had to be sent to Provincial Grand Lodge for approval.

The Provincial Secretary replied as follows:

I would remind the members of the Lodge that when this Lodge was contemplated, there was no suggestion made that it was to be a 'Prohibition Lodge'. This matter was discussed with the founders and it was agreed that the restriction with respect to intoxicating liquors should be limited to a provision excluding the spending of Lodge funds for this purpose. It was not even that every Freemason attending the Lodge should be de-barred from consuming, in reasonable quantity, liquors other than temperance drinks.

Notwithstanding the arrangement come to, the Bye Laws were so framed that, with the exception of one meeting per annum, and this only by mandate of the Master, no intoxicating liquor was to be consumed, and even in the exceptional case, the cost was not to be paid for out of Lodge Funds.

While there was really strong objection to such a departure from the arrangement made with the Province, the Bye Laws were allowed to pass in that form.

The Grand Lodge has recently set itself against the establishment of any Lodges having a sectarian or sectional views, and in the passing of the resolution by the members of this Lodge practically converts it into a 'Prohibition Lodge -- a fact which has so nearly a political aspect as to preclude its acceptance' (We must remember that in the 1920's there was Prohibition in America and the trouble that caused). Apart from the foregoing , it does NOT seem to me that any purpose is served by the suggested amendment except to destroy all independence of thought and action on the part of successive Masters of the Lodge, and is rather intemperate legislation than otherwise. The Bye Laws at present are amply sufficient to carry out the purpose, and it was this fact which leads me to think that something must have happened in the Lodge to have caused the proposal for the suggested amendment. If such facts have happened, I would be glad to know what they are and generally how the subject has arisen.

A meeting of the founders and the Provincial Grand Secretary took place and a resumé of the interview was reported to the Lodge on the 18 July 1923, when it was proposed that the amendment to Bye Law No.2 be withdrawn and the existing Bye Law should stand. This was carried unanimously, the initial reason for the proposal to change the Bye Laws is not known, however, it would seem that but for the stand of the Provincial Grand Secretary, anyone attending Rossendale Forest Lodge would not be able to drink; other than drinks of a non-intoxicating nature.

The above information has been taken from a manuscript by W.Bro T.R.Bury, Past Master of Rossendale Forest Lodge who researched minute books of the Haslingden Lodges, to compile a History of Freemasonry in Haslingden.

During its 91 years Rossendale Forest Lodge has played an active role in both the Community and in Masonic circles.  Having a Grand Lodge Officer (WBro John Ingham PAGSwdB), numerous high ranking Provincial Grand Lodge Officers, both acting and past ranks, District Secretary, District Chairman and Deputy District Chairman; whilst engaged on its Masonic activities and duties in the Rossendale District. 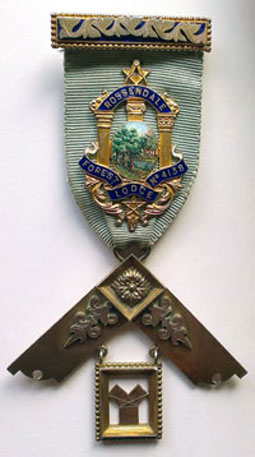 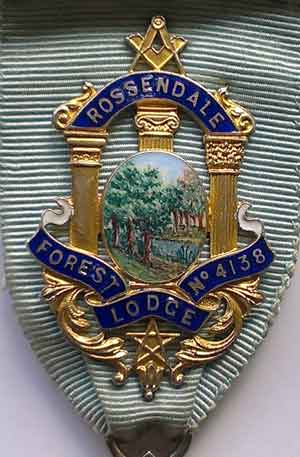 Above is a Rossendale Forest (rather excellent) Past Master's Breast Jewel and close up on the enamelled centre piece showing a scene from the ancient Forest of Rossendale.

Rossendale Lodge No.4138 held its final meeting on 28 November 2011, however, the history of Amity and Rossendale Forest has long been entwined, and from 2012 a new chapter of Masonic history can be written for the amalgamated Lodge of Amity and Rossendale Forest No.283. Both Lodges believed it sensible to amalgamate; however only time will tell if this was the right decision. The in-progress history of the new Lodge can be found in Part 3 of our history.