The Banner of the Lodge of Amity No.283.

The symbols on the Amity Banner are the Square and Compasses, probably the most recognised symbol of Freemasonry, together with the universally acknowledged greeting of a handshake; alluding to Friendship and Brotherhood. Whilst the Banner doesn't show it, the shape of the Lodge Emblem fits neatly into the 'Brotherly Love', 'Relief' and 'Truth' triangle 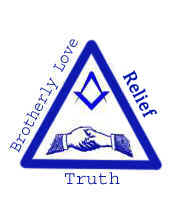 The Banner of Rossendale Forest Lodge No.4138

The Lodge name being taken from the ancient woodland which once covered the area of Rossendale. The Banner depicts items from the Forest of Rossendale, a Squirrel with an Hazel branch, from where Haslingden gets its name (the name means 'valley of the hazels'), Deer, Falconry, the Forest itself and the Red Roses of Lancashire. It also contains Masonic symbols of the 'All seeing eye', the 'Square and Compasses', an 'Ear of Corn' and a 'Sprig of Acacia'. The inscription at the bottom of the Banner is Latin and reads 'Audi - Vide - Tace', which translated means, 'Hear - See - be Silent', an excellent Masonic motto. This is part of an old european proverb 'Audi, vide, tace, si vis vivere in pace' which means 'Hear, See, be Silent - if you wish to live in peace'.
'Audi - Vide - Tace' this inscription can also be found just over the entrance to Freemasons Hall in London, and it is repeated again just under the tower; it is on the coat of Arms of UGLE.

Both banners are displayed in the Lodge room during our Lodge meetings.
It is very important to members of both Lodges that their past heritage is preserved for present and future Masons to enjoy.

The Forest of Rossendale

Both Lodge Banners are suspended from a Tree branch which was cut from one of the last Oak Trees from the ancient Royal Forest of Rossendale. The 'Forest' was a Royal hunting and Falconry Park during the 13th and 14th centuries, with Red Deer, Wild Boar, Wolves and other wild animals in abundance.  The Royal art of Falconry declined in the area, as much of the woodland was progressively cleared during the 16th and 17th century, making the area into upland pasture for Sheep farming. It is said that England's last Wild Boar was killed in this area in the 15th century and there does seem to be some truth in the legend.

Rossendale is an area of outstanding natural beauty and covers approximately 53 square miles, stretching from Bacup in the East, to Haslingden in the West, and from Stonefold in the North to the Southernmost tip, Ramsbottom.

In medieval times this area was mainly a wooded landscape with many streams with the principle river, the Irwell, running through it. It was plentiful in Fish and Wild Life which made it an ideal place for Royalty, Nobles and Gentry to fish and hunt. Rossendale was given the designation of "forest" denoting a hunting reserve. The Forest of Rossendale was home to all different kinds of wild animals, attested to by place names which exist to the present time:

In the 11th century after the Norman Conquest, the Forest of Rossendale passed into the hands of [ Roger De Poictou ], 1st Lord of the Honour of Clitheroe, his stronghold was Clitheroe Castle. It then transferred to the [ de Lacy ] family, eventually passing to [ John of Gaunt ], 1st Duke of Lancaster, whose son became Henry IV. It was owned by the sovereign until Charles II, who on his restoration to the throne bestowed the Honour upon [ General Monk ] (Monck) later 1st Duke of Albemarle. He was also granted the Forest of Bowland, becoming the 1st Lord of Bowland for his services to Charles II. In 1767, the estates passed to the [ Dukedom of Buccleugh ] who until recently possessed the freehold of the land. During the reign of Henry VII the population of the Forest of Rossendale was about 20; chiefly Foresters and Keepers of the Kings Deer......

Although the area has been known as Rossendale for around 1000 years, and is recorded as Crown Forest Land, no development took place until the end of the 15th Century when the Crown began to lease off parts of the Forest. This lead to deforestation, woodland being replaced by rolling fields and dales, however, the Rossendale Valley as it is known today remains a picturesque place to visit. 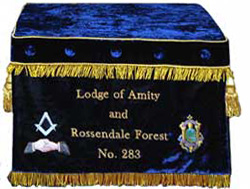